As a seaside city with numerous rivers, Tokyo abounds with magnificent bridges that make for perfect photos or backdrops on social media. From Tokyo Bay to the Sumida River, here are some of the capital’s best spans to spice up your SNS feeds.

Rainbow Bridge is one of the most photogenic spots in Tokyo. Linking Minato City’s Shibaura Pier with the shopping and entertainment district of Odaiba on Tokyo Bay, the 3750-meter-long Rainbow Bridge was completed in 1993. Supported by two 126-meter-tall towers painted white, this gorgeous suspension bridge is illuminated in red, white and green at night. It stands against the backdrop of either Tokyo Bay or central Tokyo itself, depending on your location, making for eye-popping images. Some of the best spots to shoot the bridge include Odaiba Marine Park, which gives you a wider perspective, and Shibaura Minami Futo Park, where you can shoot from under the main span. Another spot from which to admire the bridge is Daiba Park, originally a coastal battery constructed in 1853 to protect the city of Edo (modern-day Tokyo) from naval attack. If you want to experience Rainbow Bridge itself, there is a pedestrian walkway on the lower deck, providing panoramic views of the city and the northern part of Tokyo Bay.
Rainbow Bridge and Small Worlds Tokyo 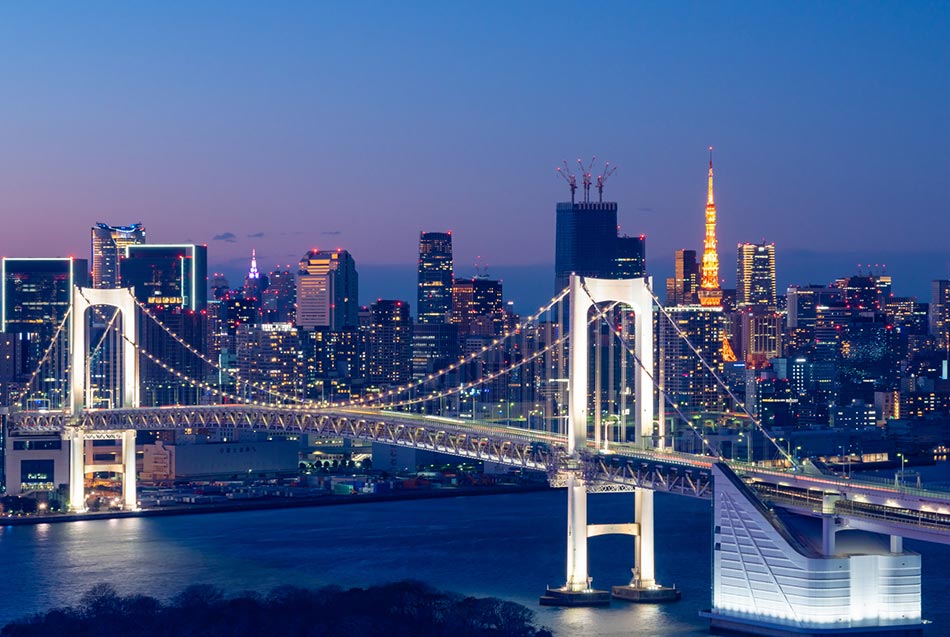 Another graceful span over the waters of Tokyo Bay is Tokyo Gate Bridge. Opened in 2012, it joins Umi-no-Mori and Wakasu in Koto City, and is part of a longer road linking the bayside cities of Ota and Koto. With a total length of 2,618 meters, Tokyo Gate Bridge stands out for its sheer size as well as its design. The two truss sections have been compared to two monsters facing each other, earning it the nickname Dinosaur Bridge. The effect is enhanced at night, when the truss sections are bathed in bright light that is reflected in the waters of the bay below. To get great pics of Tokyo Gate Bridge, try the promenade at Wakasu Kaihin Koen (Wakasu Seaside Park), which provides views of the span, and, on clear days, Mt. Fuji behind it. Use the elevator to access the pedestrian walkway on the bridge, where sweeping views of the port and cityscape of Tokyo also make for ideal social media photos. 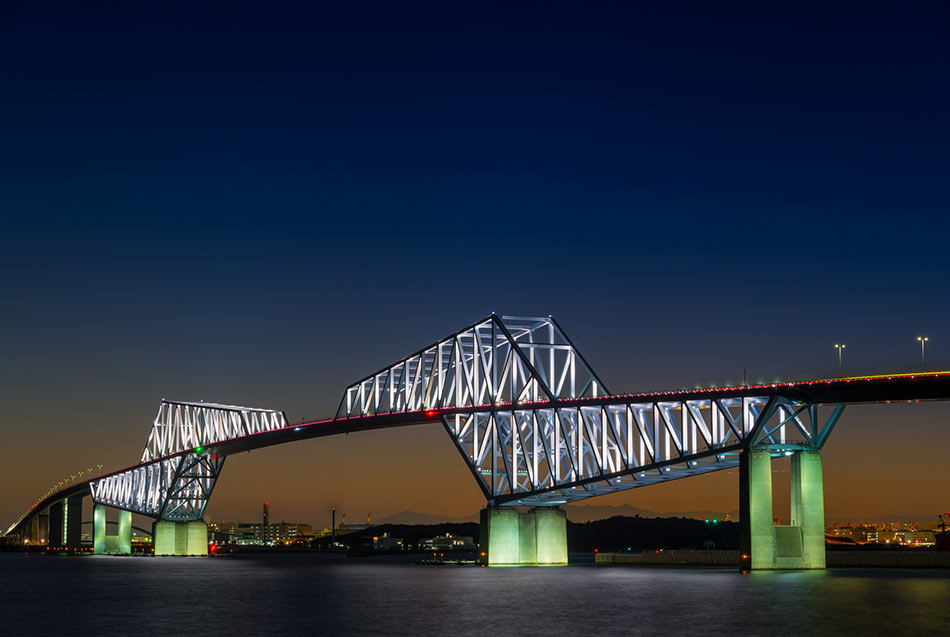 One of the many spans across the Sumida River, Kiyosu Bridge is mesmerizing when lit up in blue-white light against the backdrop of TOKYO SKYTREE which is also lit up at night. Kiyosu Bridge was modeled on a bridge spanning Germany’s Rhine river and was built in 1928 as Japan’s first self-anchored chain suspension bridge. Nearly a century later, the 186-meter-long span linking Kiyosumi with Nihonbashi-Nakasu is tasteful with its elegant lines, bridge lights recreated true to the original design and deep blue coats of paint. Promenades on both sides of the Sumida are ideal for photographing the bridge in the evening and at night, as is Kawa Terrace, a wooden observation deck at the Share Hotels LYURO Tokyo Kiyosumi’s second floor, which is open to the public. It’s also an ideal spot to enjoy a beer brewed on the spot at Pitmans Coffee and Craft Beer restaurant. 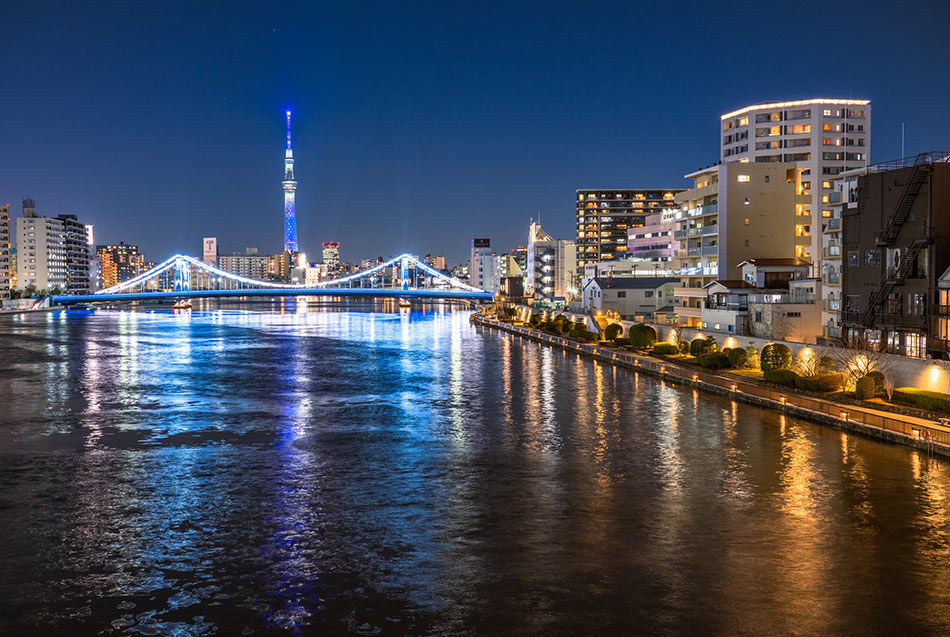 Some 800 meters downstream from Kiyosu Bridge is the visually arresting Eitai Bridge, which spans the Sumida River between Eitai and Shinkawa. The original Eitai Bridge was a wooden span built in the 1690s that was celebrated in ukiyo-e woodblock prints by Utagawa Hiroshige. It was later rebuilt multiple times. The present span was completed as a massive steel arch in 1926 during the reconstructions following the Great Kanto Earthquake of 1923. In the evening, it’s spectacularly lit with blue-white light, forming a dramatic view over the waters of the Sumida River with either the TOKYO SKYTREE or the high-rise buildings of Tsukishima in the background, when looking north or south, respectively. To get the best shots of Eitai Bridge, try the promenades on both sides of the Sumida River, or even the deck of one of the many ferries that ply the waterway. You’re sure to be rewarded with some magnificent images. 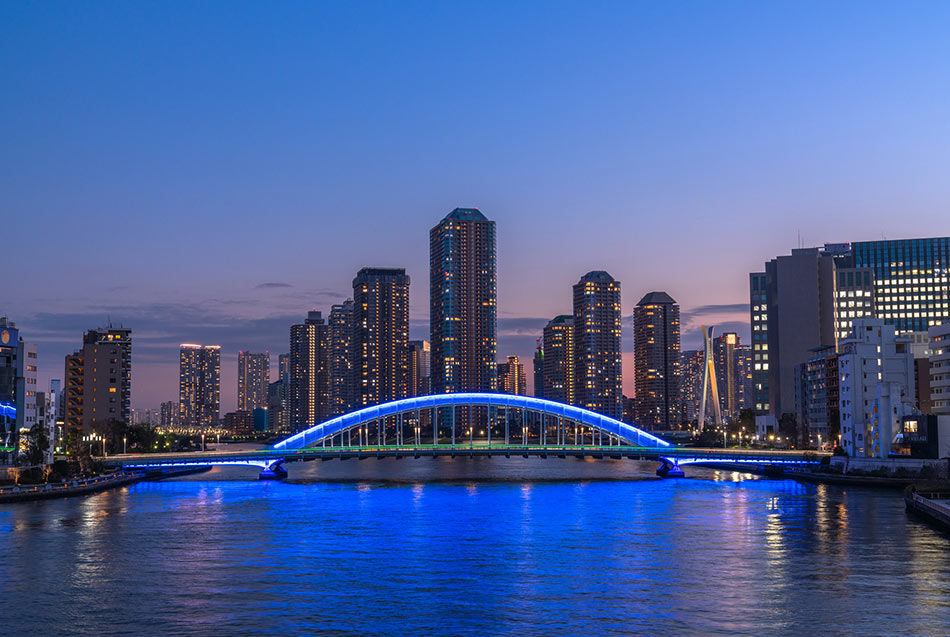