The Sky Duck and Tokyo no Kaba are two amphibious vehicles that not only travel the streets but also make an exciting plunge into Tokyo’s waterways to give visitors a unique view of the city. A delight for the kids!

The Sky Duck is an amphibious vehicle recommended for families interested in exciting and adventurous tours of the Tokyo waterfront. The Sky Duck’s livery features a colorful red-and-blue illustration of a whale, and riders get aboard its elevated body via a ramp. On the Tokyo View Course, which departs from Tokyo Teleport Station, guests will be thrilled by the sights of various landmarks of the Odaiba and Toyosu areas, including the sprawling Tokyo Fish Market, the Ariake Arena and other facilities that hosted 2020 Tokyo Olympic and Paralympic events. Then comes what most guests—particularly the kids—think is the highlight of the tour. After a short pause to gauge the wind and tides, the Sky Duck picks up speed down a slope as it plunges into the water at the splash point. A huge plume of water engulfs the front of the boat, similar to a water ride at an amusement park. Then the Sky Duck switches to its boat mode, and proceeds on a course that gives those aboard another perspective of the waterfront area. The cruise route reaches an ideal spot for a spectacular view of the lofty span and towers of the Rainbow Bridge, the graceful structure that connects central Tokyo to the reclaimed land areas. Then it cruises back to the splash point before making its return to land. The complete route takes about 80 minutes.
Reservations can be made online (in Japanese). Please check the website for information on routes and fees. 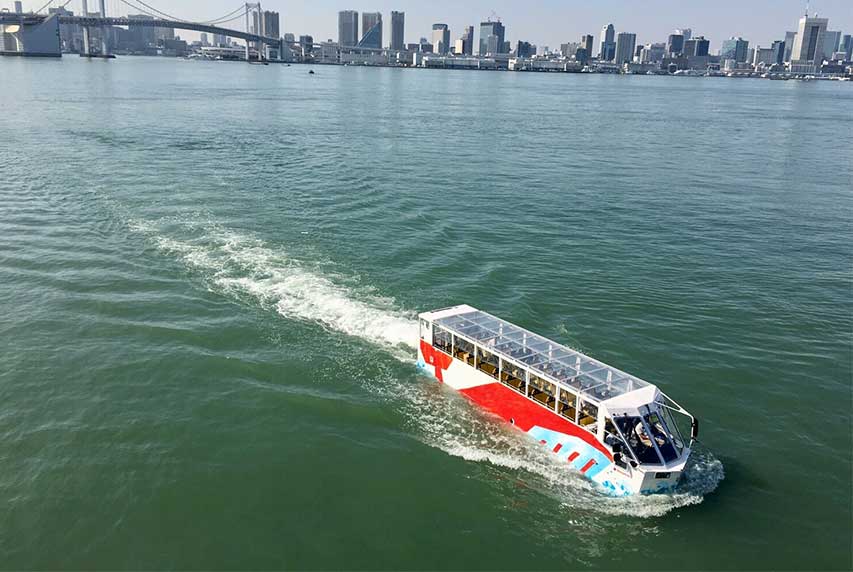 This course features the same amphibious Sky Duck bus on a route that is centered on the area around the 634-meter Tokyo Skytree, one of the world’s tallest towers. After cruising around the nearby streets, including passing by the Kameido Tenjin Shrine, known for its seasonal flowers, the Sky Duck makes its watery plunge into a canal, a moment of great excitement for the kids. This tour takes approximately 90 minutes.
Reservations can be made online (in Japanese). Please check the website for information on routes and fees. 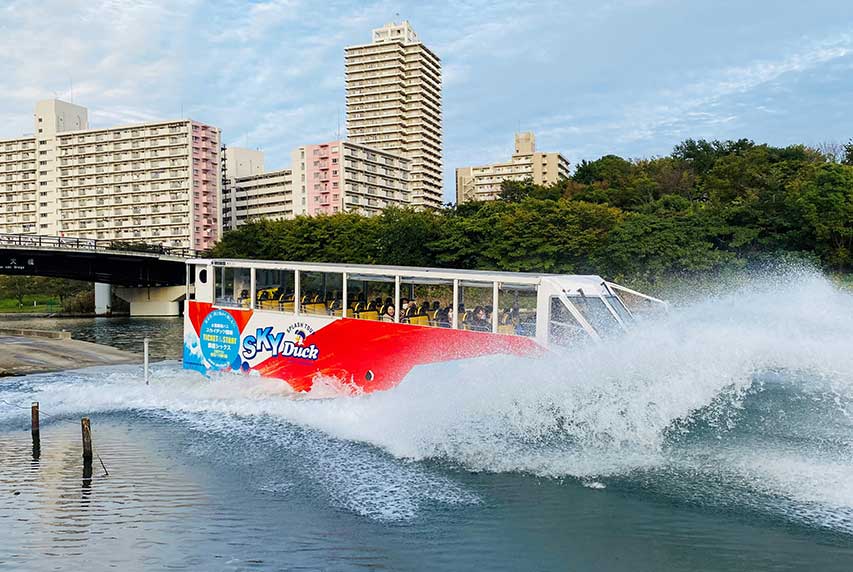 Tokyo no Kaba is another amphibious bus service that operates regularly in Odaiba. Kaba means hippopotamus in Japanese, and in fact, the hippo is the inspiration for the design of the boat. Illustrations of a great blue hippo grace the four sides of the bus, and all the seat covers feature a colorful hippo pattern. Many guests find the elongated nose of the bus is also reminiscent of the great aquatic mammal. Like the Sky Duck, the crew of the Tokyo no Kaba studies the wind and current speeds before the bus makes the big splash into the water, looking very much like a hippo entering a lake. Of course, once the vehicle enters the water, it ceases to be a land-based automobile and uses its propeller to move forward at a speed of six knots, with its direction controlled by a rudder. A 3-D sound system, the first of its kind in the world, adds to the rare spectacle of traveling down Tokyo waterways in an amphibious “hippo.” You’ll be sharing the water with all kinds of boats, from ocean-going cruise ships and ferries to fishing boats, water buses and the traditional pleasure boats known as yakatabune. The latter can be identified by their bright red paper lanterns that decorate their exterior. The 45-minute course is accompanied by a guide as it passes commercial facilities and landmarks around Odaiba before heading to Rainbow Bridge. Visitors can also enjoy the rare experience of passing under the Rainbow Bride. Boarding is available at the Aqua City in Odaiba.
Reservations can be made online (in Japanese or English). Please check the website for information on routes and fees. 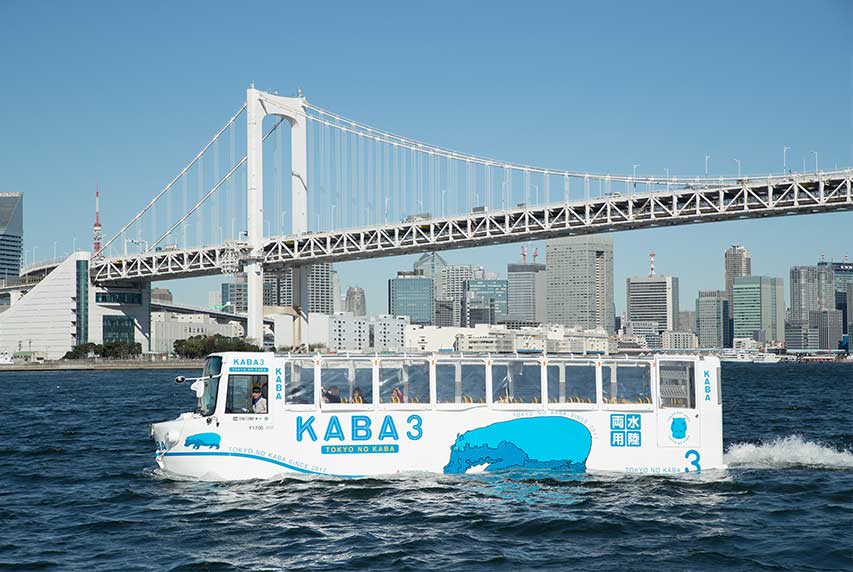