Get on a bicycle and tour Tokyo's waterfronts

Tokyo has no shortage of coastline, shoreline, or riverbanks. It has canals that have transported people and goods for centuries, moats that surround former medieval estates, rivers with sources in the city's outlying mountains, and marshes that empty into Tokyo Bay. Riding along these waterfronts on a bicycle is an amazing—and, given the relative lack of elevation change, usually relaxing—way to explore the contours of Japan's capital. And don't worry if you haven't got a bike with you: there are lots of affordable and convenient rental options.

A taste of the outdoors at Wakasu Seaside Park

The Wakasu Kaihin Koen (Wakasu Seaside Park) occupies half of Wakasu Island, which sits in Tokyo Bay just off Koto City. A 6-km course follows the island's eastern coast. You can rent a bicycle at the cycling center near the gate bridge on the south side of the park. (And if you have kids, don't miss the mini-course next to the center, which has a collection of fun vehicles.) On the main cycling course, enjoy sweeping views of the bay, pleasant greenery, and lots of little rest areas. The island also has some great amenities that offer a taste of the outdoors in the big city, including a fishing center, a campground where you can barbecue, and a golf course. 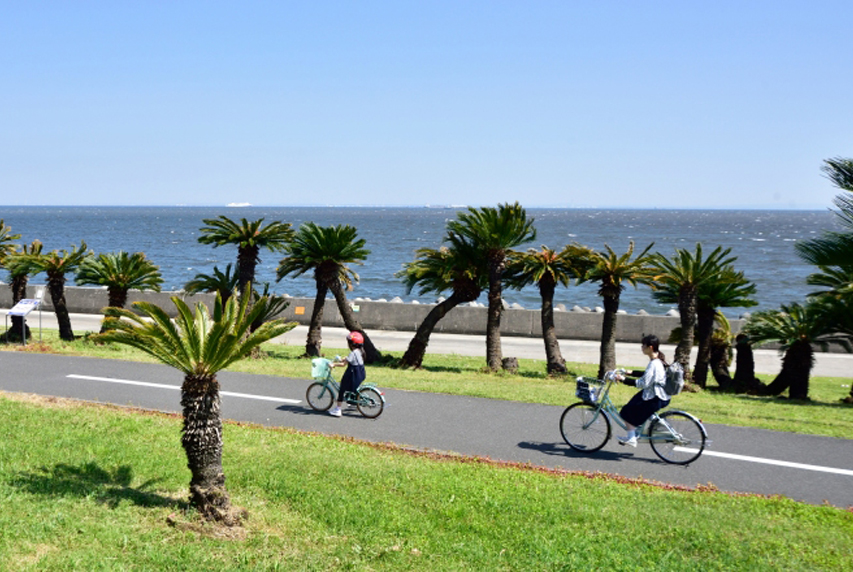 The Edogawa cycling course follows the banks of the Edo River, which forms the border between Tokyo and Chiba Prefectures. It's a great ride full of beautiful nature during any of the four seasons. The full 64-km course starts in Saitama Prefecture, where the Edo River branches off from the Tone River, and ends in Chiba Prefecture. But for a much shorter course within Tokyo, a common starting point is Mizumoto Park in Katsushika City, with the endpoint being Shibamata, an old-school neighborhood made famous by the long-running Otoko wa Tsurai yo (Being A Man is Tough) movie series. The main character is Tora-san, a traveling salesman who finds himself in misadventures across Japan, always yearning to get back to Shibamata, his hometown. Check out the Shibamata Taishakuten Temple, a picturesque traditional house called Yamamoto-tei, and, if your curiosity about Tora-san is piqued, the Katsushika Shibamata Tora-san Museum.
If you wish to rent a bicycle, the Tora-san Museum rents out bicycles, and Edogawa City has rent-a-cycles at the bicycle parking areas of 11 train stations, including Kasai, Nishi-kasai, Kasai-Rinkai Park, and Koiwa. 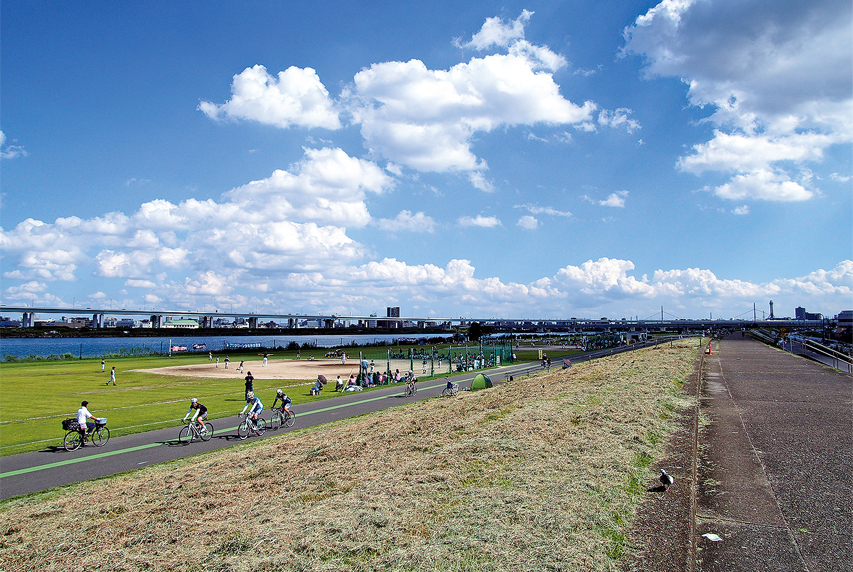 Ride along the Sumida River for a true Tokyo adventure

Following the course of the Sumida River will take you near, or even right past, many of Tokyo's must-see neighborhoods and landmarks. You could start in Ryogoku—the epicenter of sumo wrestling, go past a series of colorful bridges, and find yourself at the base of TOKYO SKYTREE, with Asakusa and Sensoji Temple just on the other side of the river. Or, you could check out Tsukiji Outer Market (which, despite the move of the famous fish market to Toyosu, is still a massive wholesale market in its own right), then head to glitzy Ginza. Or, take a detour to Tokyo Station and the Imperial Palace. Or chill out on Tsukuda, which sits at the tip of a piece of reclaimed land in the middle of the river. The Sumida River was a vital artery for commerce and transport in centuries past and it's still right at the heart of Tokyo today.

The adventures continue: Other riverside bicycle routes in Tokyo

The above suggestions are just to get you started. Cycle along the waterways of Tokyo and you’ll see a wonderful mix of big-city development and beautiful nature, getting some exercise while you do it. Here are a few more ideas: