Tokyo is a city of many rivers coursing through mountain valleys and lowland hills. Nature enthusiasts will love relaxing in these cool, refreshing oases that offer an escape from the hustle and bustle of the city.

If you love urban green spaces, a must-see destination is Todoroki Valley, the only river valley of its kind in the 23 special wards of Tokyo. This serene, verdant wonder was carved out by the Yazawagawa River, a brook that joins the Tamagawa River. Steps away from Todoroki Station on the Oimachi Line, you’ll find Golf-bashi Bridge, marking the beginning of a roughly one kilometer walking course. 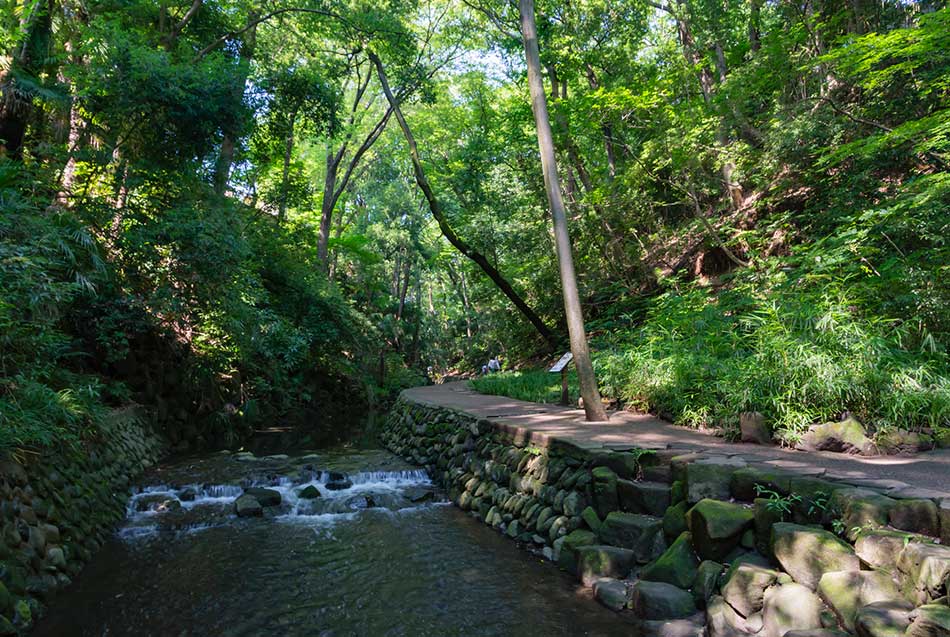 In the summer, you may notice that the ravine is a few degrees cooler than the street. The path along the Yazawagawa takes you under zelkova, mountain cherry, bamboo-leaf oak, konara oak and other trees that form a towering jungle canopy overhead. You might feel like you’ve entered another world. The sound of the brook tumbling over rocks is sure to melt your stress away.
There are several cultural attractions along the path. On the upper part of the east riverbank, there is a preserved burial mound dating to about the 6th century CE, testifying to the early human settlement of the Musashino Plain.
A few minutes’ walk farther downstream, you’ll find the Fudo-no-Taki waterfall, which is a small cascade on the eastern embankment. Also used for ascetic training, the waterfall produces a roaring sound, or “todoroita,” which, according to legend, lent its name to the ravine. The falls are by a staircase leading up to Todoroki Fudoson, a tranquil Buddhist temple dedicated to the deity Fudo Myoo.
Setsugekka is a charming traditional teahouse nearby that serves delectable items such as kuzumochi (fermented wheat starch rice cakes) and kuromitsu kinako (roasted soybean flour with sweet syrup). It has indoor and outdoor seating, allowing guests to admire the beauty of the ravine in all four seasons.
Across the brook from Setsugekka on the western embankment is Todoroki Japanese Gardens. It consists of a traditional Japanese garden with a walking path, a bamboo grove, citrus trees and a grassy expanse atop the embankment that’s perfect for relaxing. From there, it’s another 600 m to the Tamagawa, and then a 30-minute walk upstream to the fashionable dining and shopping district of Futako-Tamagawa.
Explore Todoroki Valley 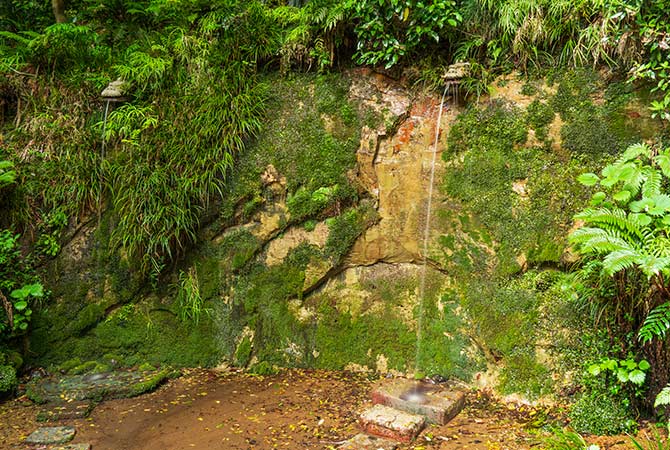 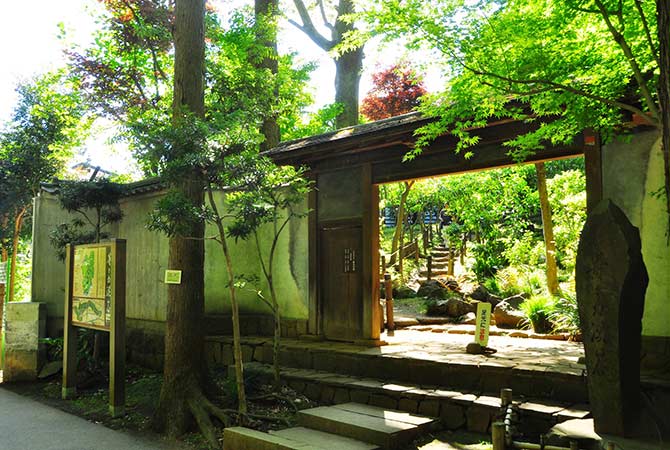 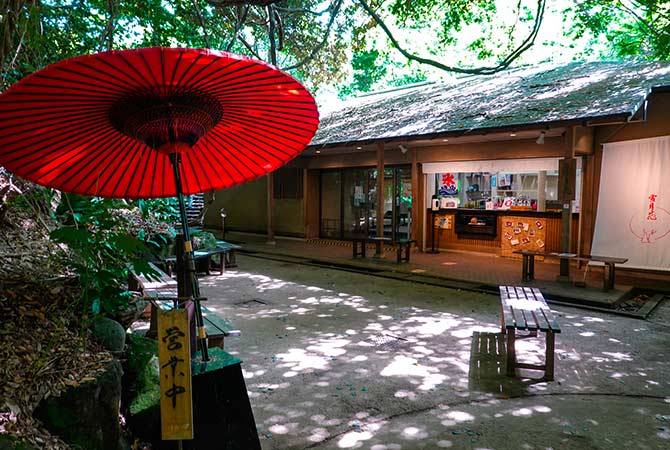 Another Tamagawa tributary is the Akigawa River, which meanders through Akiruno and Hinohara in western Tokyo. Surrounded by lush green mountains, the Akigawa springs from Chichibu-Tama-Kai National Park and flows eastward into a delightful valley that’s perfect for nature-loving day trippers. 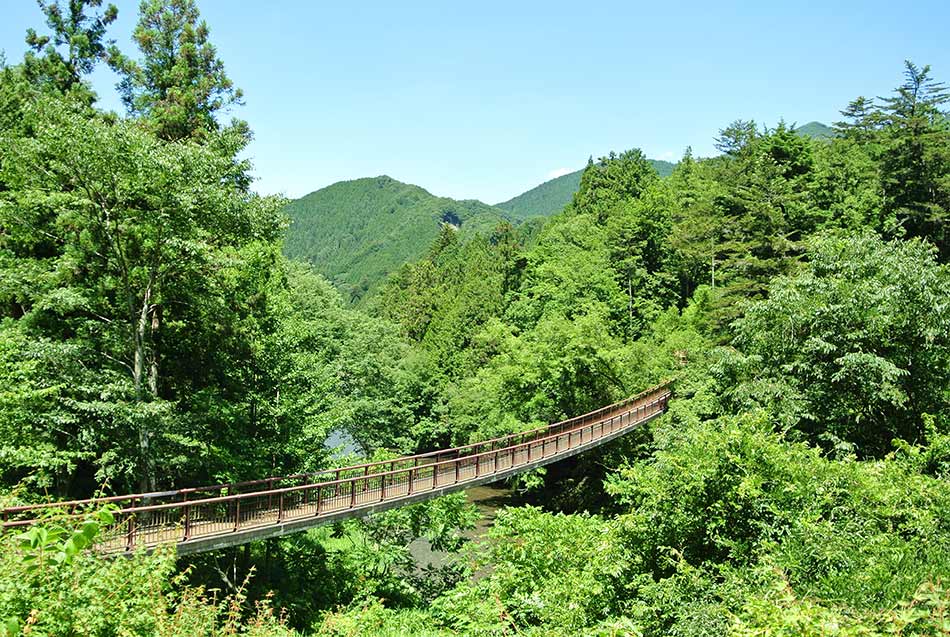 The river is easily reached from Musashi-Itsukaichi Station in about 8 minutes on foot. A path on the south bank, later crossing to the north bank, leads upstream. You can enjoy a relaxing walk of about 6 km as you make your way up the valley to the spectacular Ishibune-bashi, a 96-meter-long suspension footbridge spanning the Akigawa. In fall, this is a particularly photogenic spot as the forests turn crimson and gold with the changing temperatures.
A few minutes beyond it is "Akigawa Keikoku Seoto-no-Yu Spa", a relaxing facility with hot springs—including a free outdoor footbath. After steaming away the tension in your tired muscles, you can head north some 7 km up the Yozawagawa River and admire the stalactites and stalagmites in Mitsugo Cave, a three-tiered limestone cave with a total length of 120 meters.
Akigawa Valley 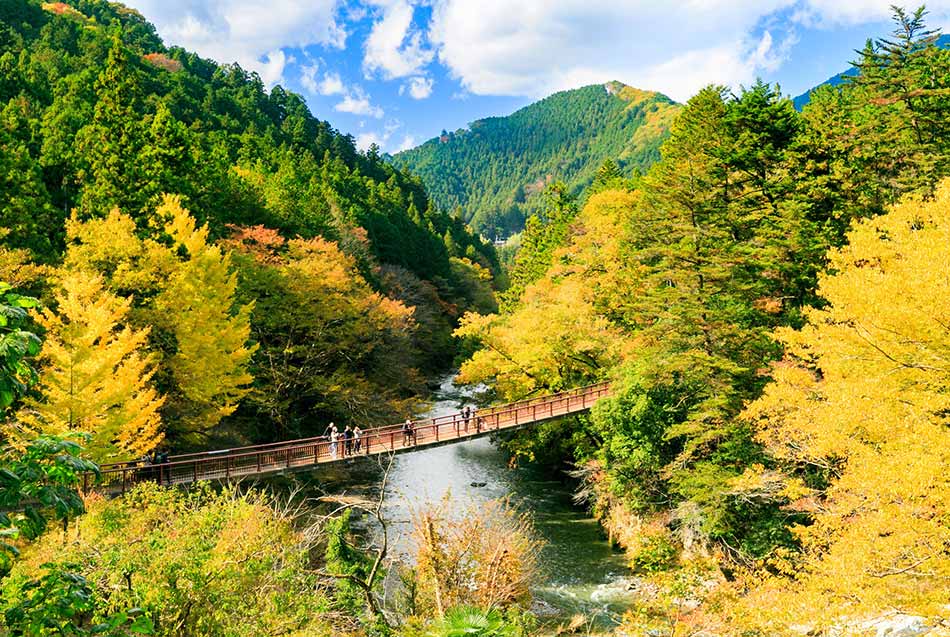 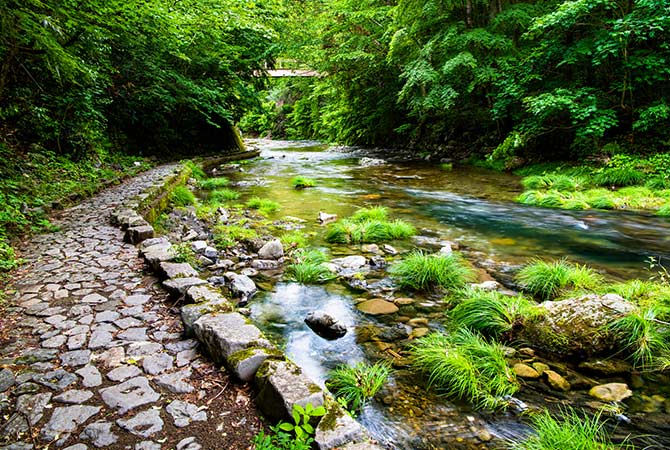 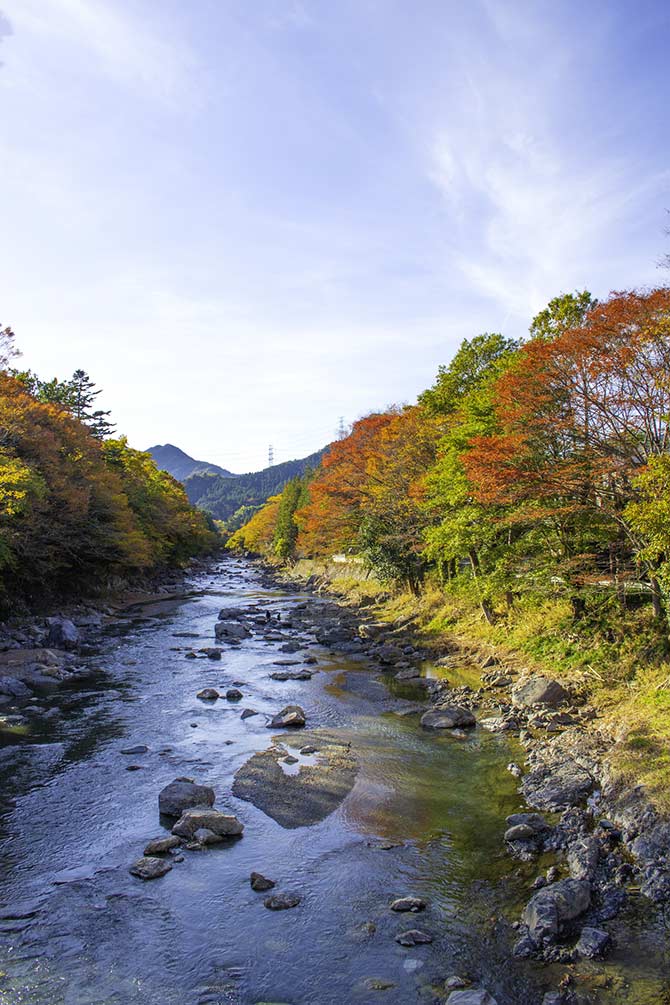 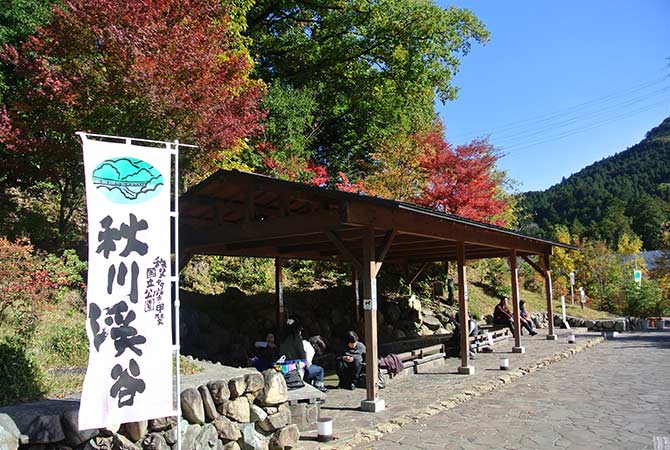 Mitake Gorge is another eye-popping landscape, this time on the upper reaches of the Tamagawa itself in Ome, Tokyo. Situated around Mitake Station on the Ome Line and named after nearby Mt. Mitake (929 m), the Mitake Valley follows the Tamagawa as it meanders through the landscape.
This mountain valley is particularly magnificent in autumn when fall colors dapple the trees, but it’s equally stunning when low-hanging clouds of mist rake the slopes. The riverside path extends for about 4 km on both sides of Mitake Station, and winds along enormous boulders and rapids, which make the Tamagawa perfect for kayaking and rafting here.
Apart from the soothing natural attractions, you can also soak up some culture at the Gyokudo Art Museum, dedicated to the painter Gyokudo Kawai (1873–1957) and located a few minutes’ walk from Mitake Station; and the Kushi Kanzashi Museum, which houses a unique collection of over 4,000 antique hair ornaments and is approximately 10 minutes on foot from Sawai Station on the Ome Line.
Mitake Gorge Autumn Colors Festival 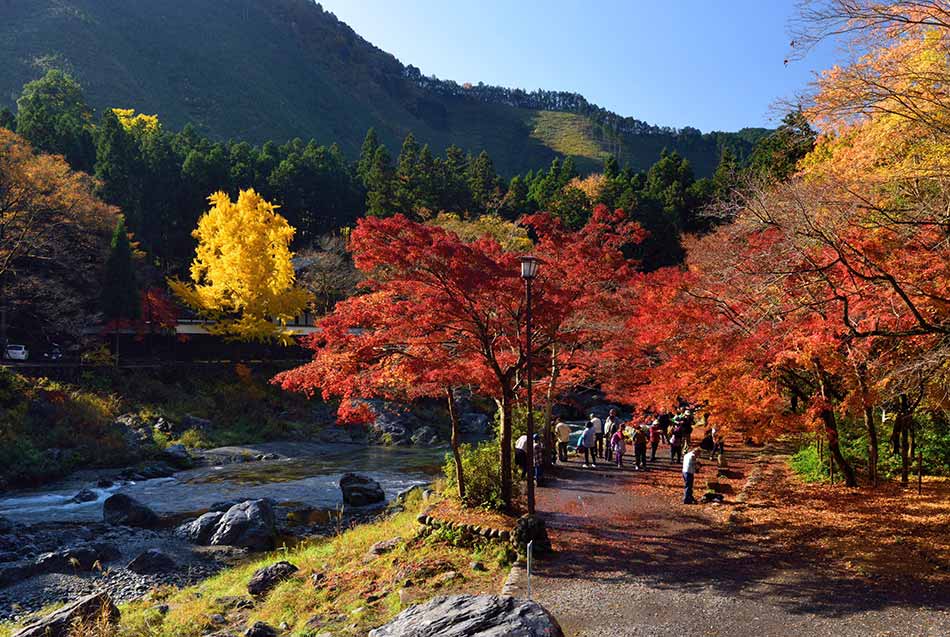 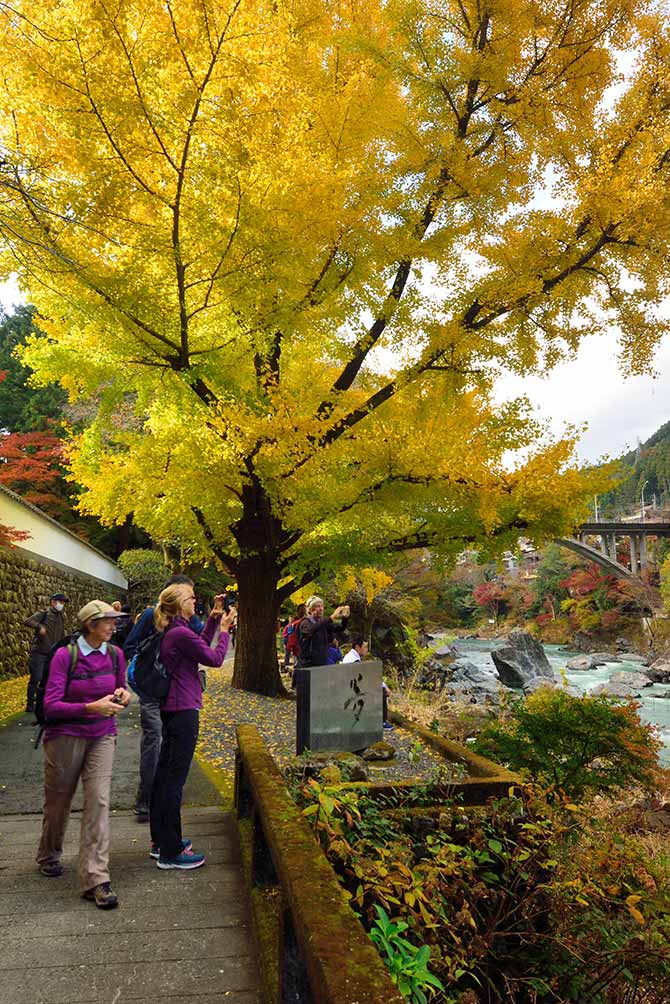