The vast landscape of Tokyo has some of the best skyline views in the world. On a clear day, you can see Mt. Fuji to the west and Tokyo Bay to the south, as well as plenty of unique buildings and towers. And at night, you'll feel as though you're looking out at a sea of stars. Don't miss the many breathtaking sights you can take in while looking at Tokyo from above. And make sure to take some pictures—they’d be great as your computer wallpaper or smartphone background!

If you want to catch a sweeping view of the Tokyo cityscape, one good option is to go up! In high-rise-heavy districts like Shinjuku and Shibuya, there are bars and restaurants situated near the tops of buildings where you can gaze out on the urban expanse.
There are also many spots that are landmarks in their own right, and that offer fantastic views and fun attractions. A few examples: the VR experiences at the top of Ikebukuro Sunshine, the Mori Art Museum on the top floor of the Roppongi Hills Mori Tower.

333-meter-high Tokyo Tower, which was built in 1958, is still a landmark of Tokyo, as well as a symbol of Tokyo’s rebirth after World War II. The tower, located on the hills of Tokyo, has two observation decks which provide extensive views across the city. You can take the elevator or walk up 600 steps to the main deck, located 150 meters above the ground. If you are lucky, on sunny days you can even catch a glimpse of Mt. Fuji rising in the distance. The top deck, at 250 meters, was renovated in 2018. 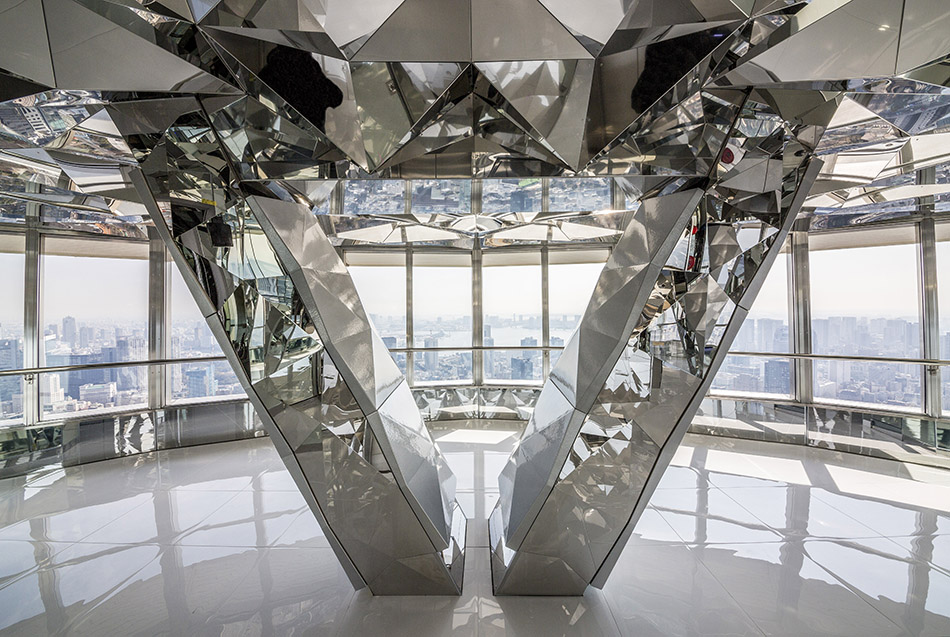 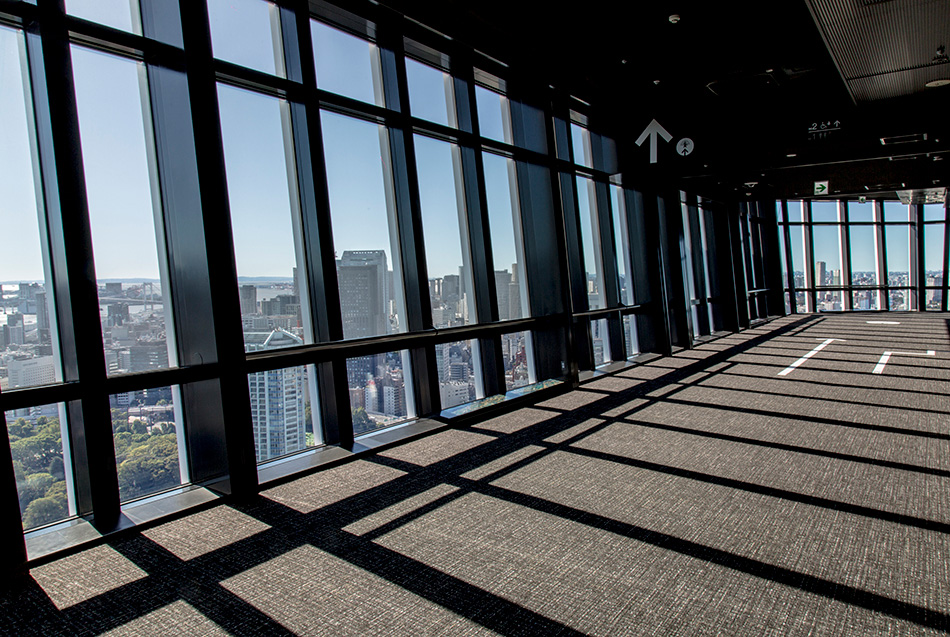 The tallest structure in Japan is the TOKYO SKYTREE! Located on the east side of Tokyo, it stands 634 meters tall. There are two observation platforms: the Tembo Deck (350 meters) and the Tembo Galleria (450 meters). 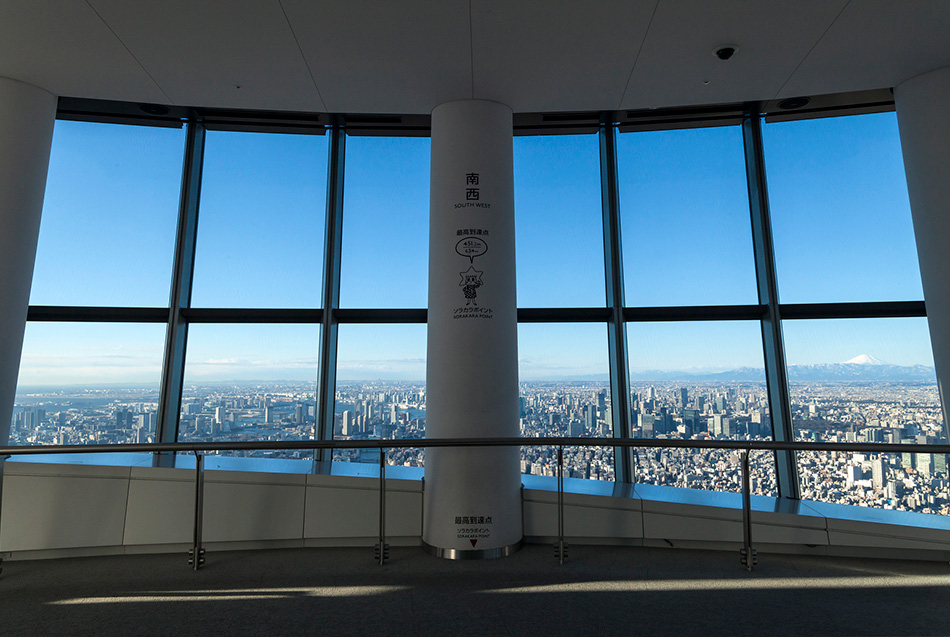 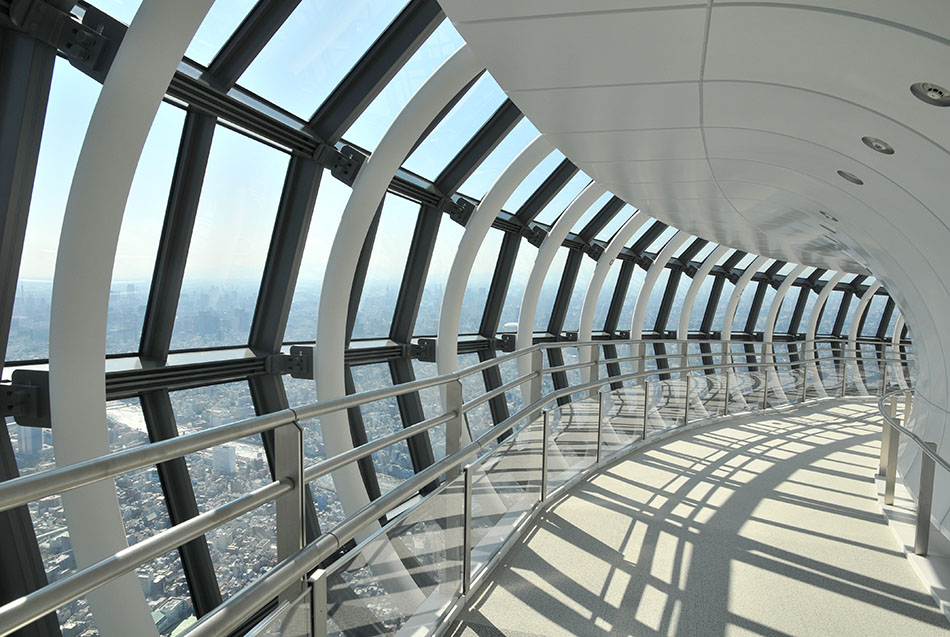 Stimulate your senses with the views at the Sky Circus Sunshine 60 Observatory, up at the top of the Ikebukuro Sunshine tower. Not just a viewing platform, this 251-meter observatory has a series of interactive experiences, including a tunnel full of optical illusions and some cutting-edge VR setups. (Ikebukuro Sunshine also has tons of great food & shopping.) 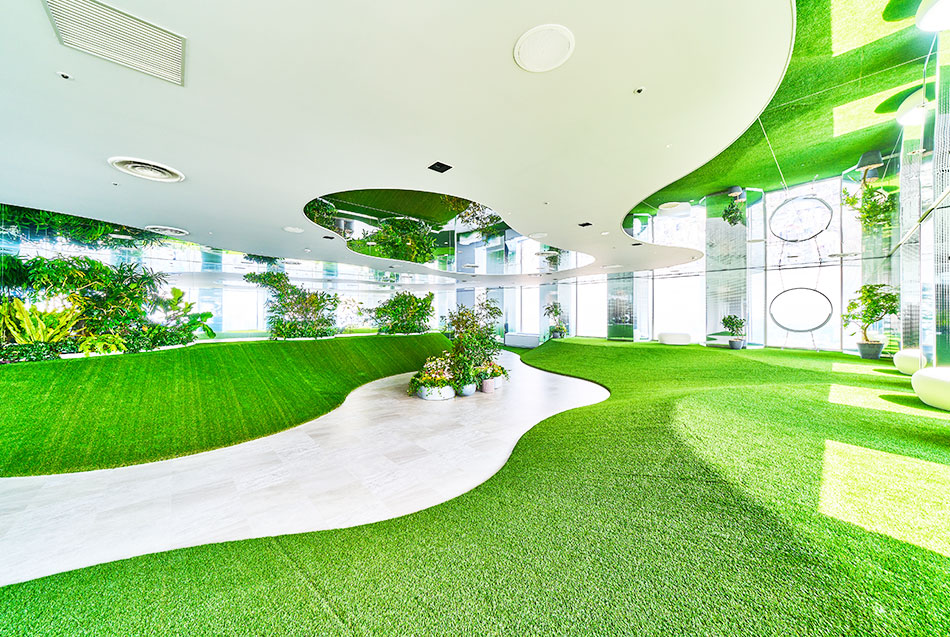 For an awesome spot right in the heart of Tokyo, check out the Tokyo City View’s outdoor observation deck called Sky Deck. This observation deck is on the roof top of Mori Tower and offers 360-degree views of the metropolitan landscape day and night. 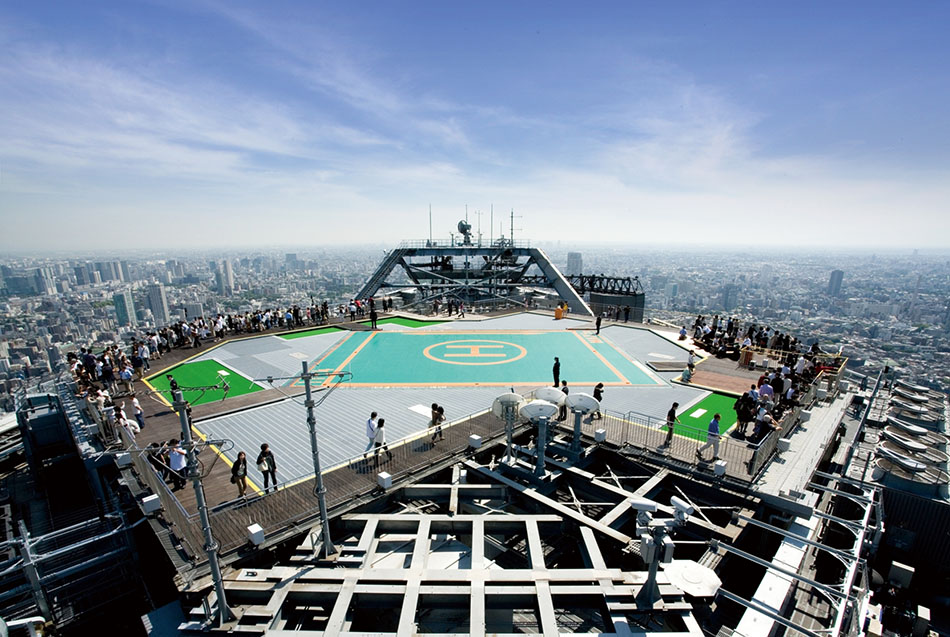 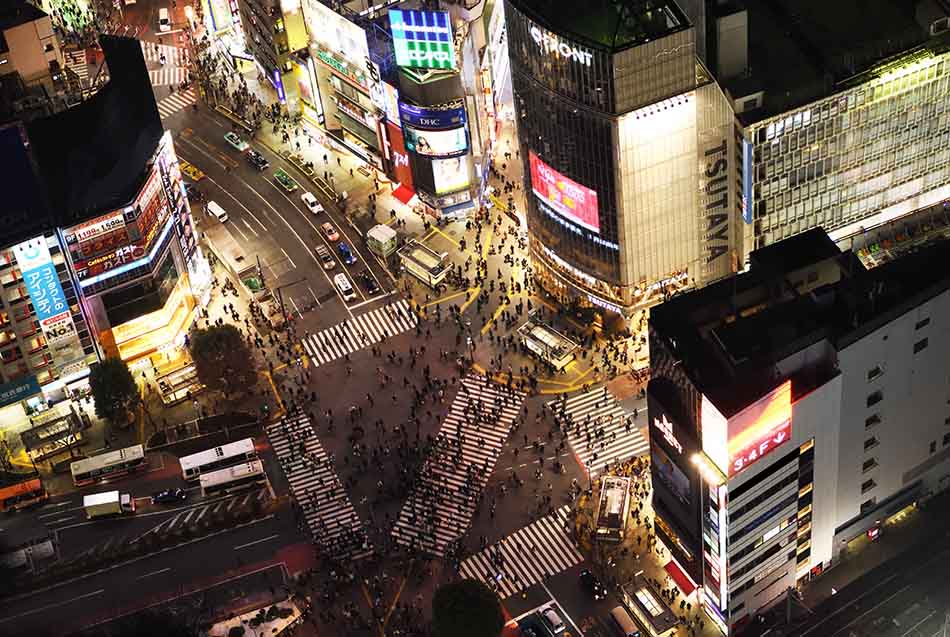 Tokyo has countless places to catch a beautiful view of the cityscape, but what if you don’t want to eat, shop or pay an entrance fee? What if you just want to take in awesome views for free? Plenty of buildings and complexes have free roof decks or observation platforms. Here are some great options.

Located in Shinjuku, the Tokyo Metropolitan Government Building offers great daytime views and the chance to see Mt. Fuji. You do need to go through a security check, but then it’s a quick elevator ride (from the 1st floor of Main Building No. 1) 202 meters above the ground. There is both a South Observation Deck and a North Observation Deck.

Located on the 38th floor of the fashionable Yebisu Garden Place complex, come here for both daytime and nighttime views, and stay for the great shopping and dining options. Visitors can even take part in beer tastings at the "Tasting Salon" inside the Museum of Yebisu Beer.

Head to the top of the massive Caretta Shiodome commercial complex for panoramic views of Tokyo Bay and an assortment of cultural facilities, including a theater and the Ad Museum Tokyo, the only advertising museum in Japan.
The 46th and 47th floors are also home to the Sky Restaurant, where you can enjoy a meal while gazing across Tokyo. (Not free, but a great restaurant to know about nonetheless!) 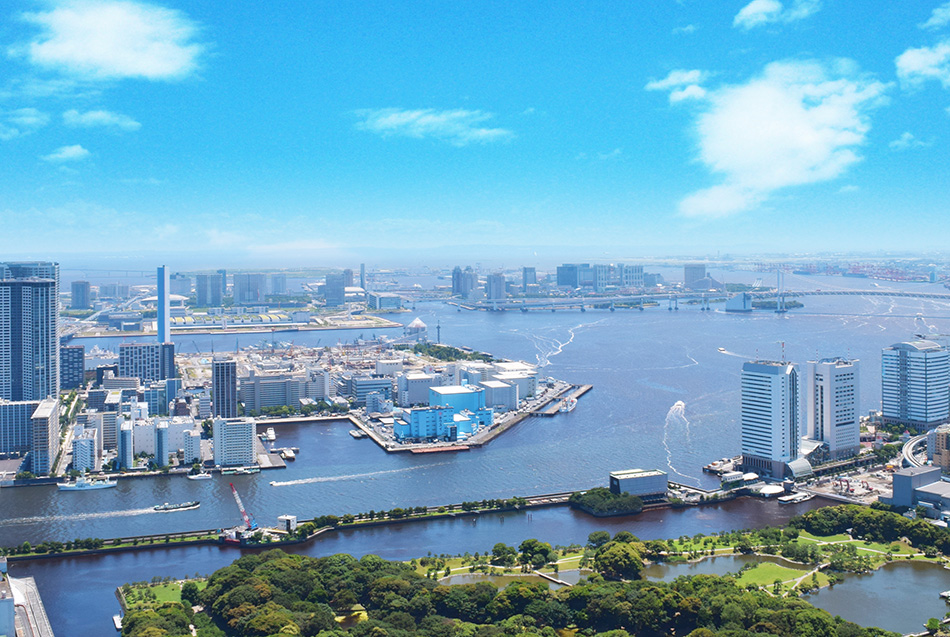 From the observation deck on the 25th floor of the Bunkyo Civic Center, you can see TOKYO SKYTREE. Visit in the autumn to see the changing leaves of the Koishikawa Korakuen Gardens.
*Tripods may not be used. There is no dedicated elevator for observation deck visitors; it is shared with others, so please observe good manners. 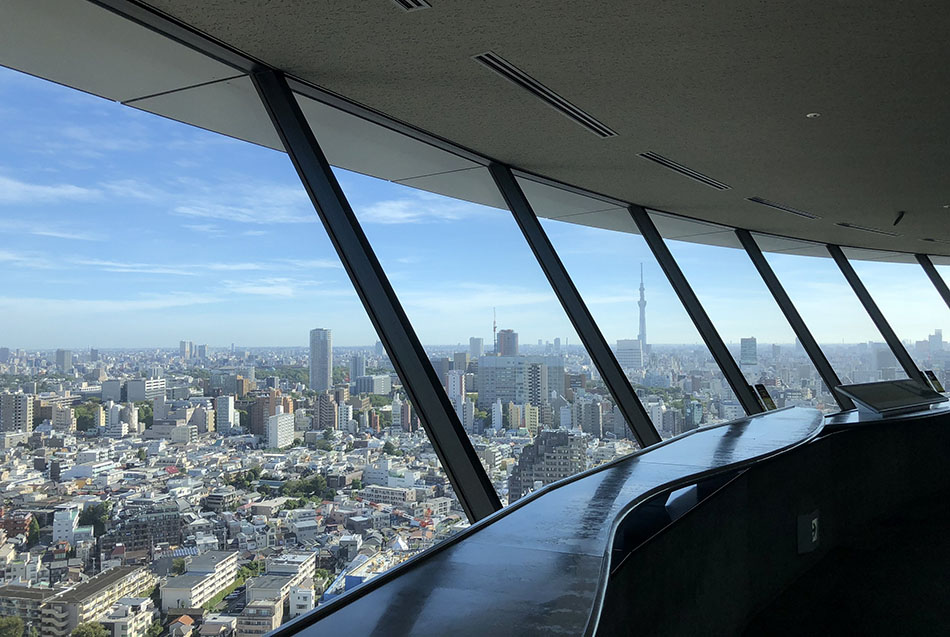 For something more low-key, try the “Sky Carrot” observation areas of the Carrot Tower, located in the Sangenjaya neighborhood, which is right next to Shibuya. Often overlooked for more famous observation decks, this spot is popular among young couples for its ambiance. And of course admission is free! 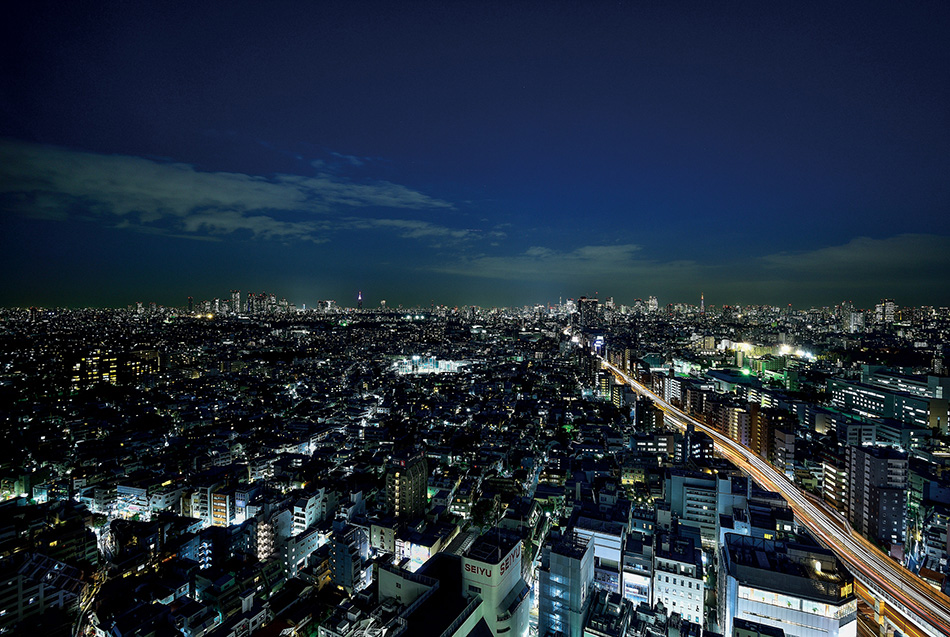 As night falls, Tokyo becomes an endless expanse of lights in the darkness. Some of the spots we mentioned offer great night views. The very top deck (250 meters) of Tokyo Tower has topsy-turvy mirrors and LED lighting effects that give the feeling of floating above the city in a high-tech spaceship through a sea of stars. And while the views from TOKYO SKYTREE are spectacular all day long, watching the sunset and the city lights come to life below is particularly romantic. Or, book a table at the Ginza Sky Lounge for a romantic dinner.
Finally, an area of Tokyo with several great night view spots, all within walking distance, is Odaiba. 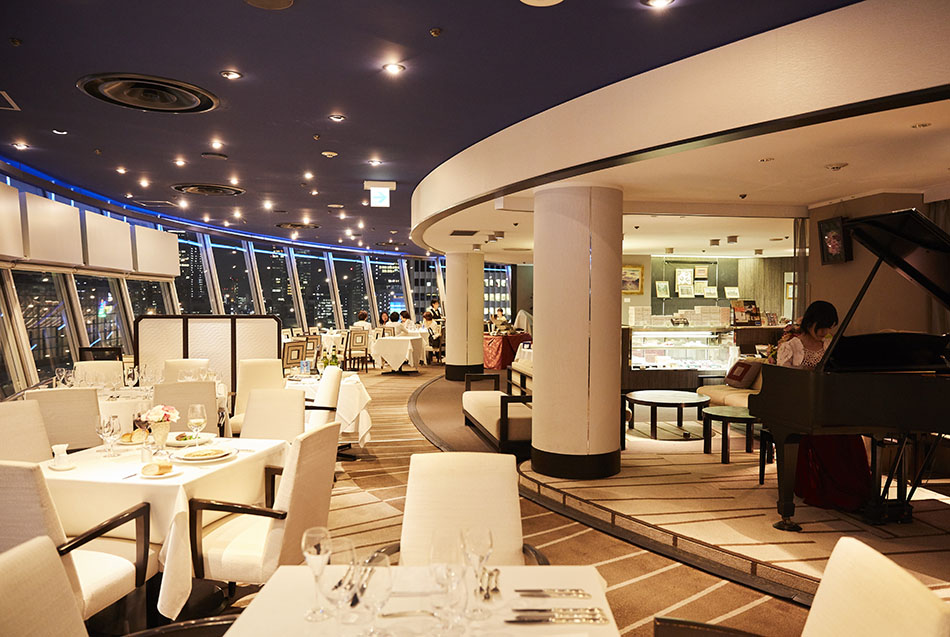 The Telecom Center Building Observatory is one of the best places to view the scenic lights of Odaiba and greater Tokyo. Head to the Telecom Center Building's 21st floor to reach the observation deck. From this vantage point you can see Odaiba's Rainbow Bridge and Ferris wheel, as well as the Fuji Television Building, TOKYO SKYTREE and Tokyo Tower, all against the backdrop of the glittering lights of the city. 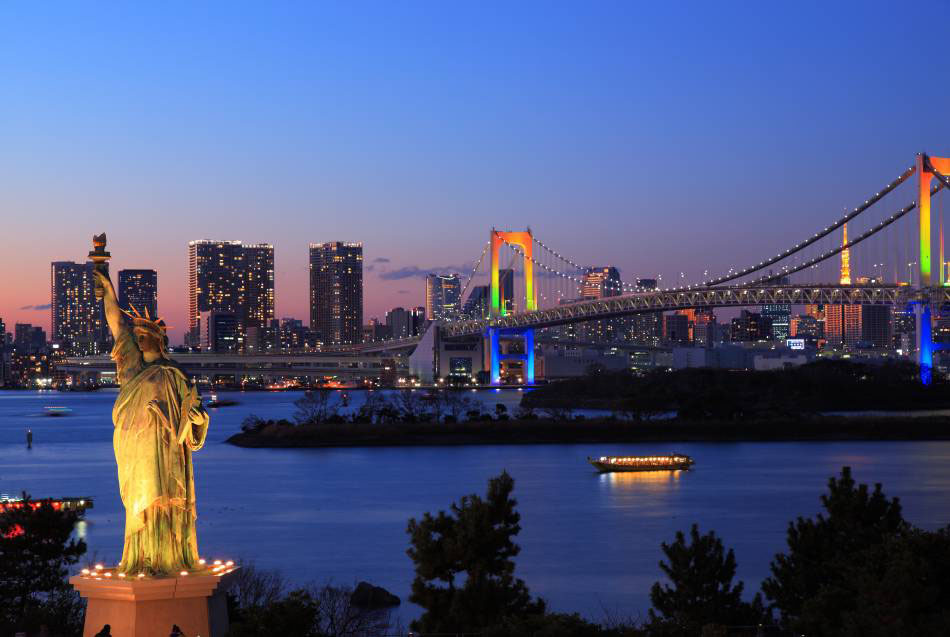