Japan is renowned for its comprehensive and efficient train network – and its underground trains are no different. Covering the whole city with more than 280 stations, Tokyo subway lines will help you get to almost any destination quickly and easily. The clearly color-coded map is a handy guide, and with multilingual signs in both stations and trains, riding the subway has never been simpler. Tokyo Metro and Toei Transportation offer a variety of discount tickets that are a good way to save some cash if you're traveling a lot by subway in one day. Or pick up a rechargeable IC card to enter, exit and change between lines with the confidence of a local.
Note: Each railway operator in the Greater Tokyo Metropolitan area including JR East may have temporarily moved up last train schedules. Check official websites for latest information.

The largest operator of subway train lines, Tokyo Metro provides 9 trains lines covering 195 km of track between 179 stations. On average, almost 7.6 million passengers a day ride its network – it's a key way to get around the city from the north-western suburbs to eastern neighborhoods across the Sumida River. Several of its lines connect directly with other train lines, so you don't always have to hop on and off a train to continue your journey smoothly.

The other major subway train operator is Toei, operating 106 stations connected by four lines: the Asakusa Line, the Mita Line, the Shinjuku Line, and the Oedo Line. In 2018, an average of approximately 2.82 million people used it daily, making it another major metropolitan network. The Oedo lines forms a loop around the city, and the Asakusa Line directly connects with other train lines that will take you all the way to Narita or Haneda Airport.

A range of network operators run train lines throughout the city, each requiring different tickets that can be purchased from ticket machines near the ticket gates. There are several JR lines, where you can use your JR pass; the Keio line will take you out west to the hiking area of Mt Takao and connects directly with the Toei Shinjuku subway line; and Odakyu will take you southwest towards the hot spring town of Hakone, as well as conveniently connecting to the Chiyoda subway line too.

There are a variety of options for getting around the Tokyo subway. Every station has multilingual ticket machines where you can buy a one-way fare ticket, or you can use a rechargeable IC card to swipe in and out of the ticket gates. Tokyo Metro and Toei have teamed up to offer a subway pass for tourists that can save you some yen, as well as being super convenient. Be mindful that the Tokyo subway lines are not operated by Japan Rail (JR) so you cannot use a JR Pass.

If you're going to be riding the subway several times within a few days, grab yourself a tourist pass for unlimited travel on all subway lines, with choices of a 24-, 48-, or 72-hour ticket. They are available from Tokyo Metro Pass Offices and Tourist Information at some subway stations, as well as from several hotels, branches of large electronics stores like Bic Camera, and tourist information centers throughout the city. You will need to bring your passport to show that you're a visitor to Japan.

You can buy a regular one-way ticket from a multilingual machine at any subway station. Fares are determined by distance traveled, rather than by a particular route or station. Keep in mind that Tokyo Metro and Toei are separate companies so you will separate tickets for both.
Tokyo Metro tickets cost from 170 to 320 yen depending on how far you travel. Toei fares are a little more expensive, ranging from 180 to 430 yen.
To enter the subway, insert your ticket into a ticket gate with a yellow slot and take it out the other side as you pass through. Hold onto it until the end of your journey, because you'll need it to get out. 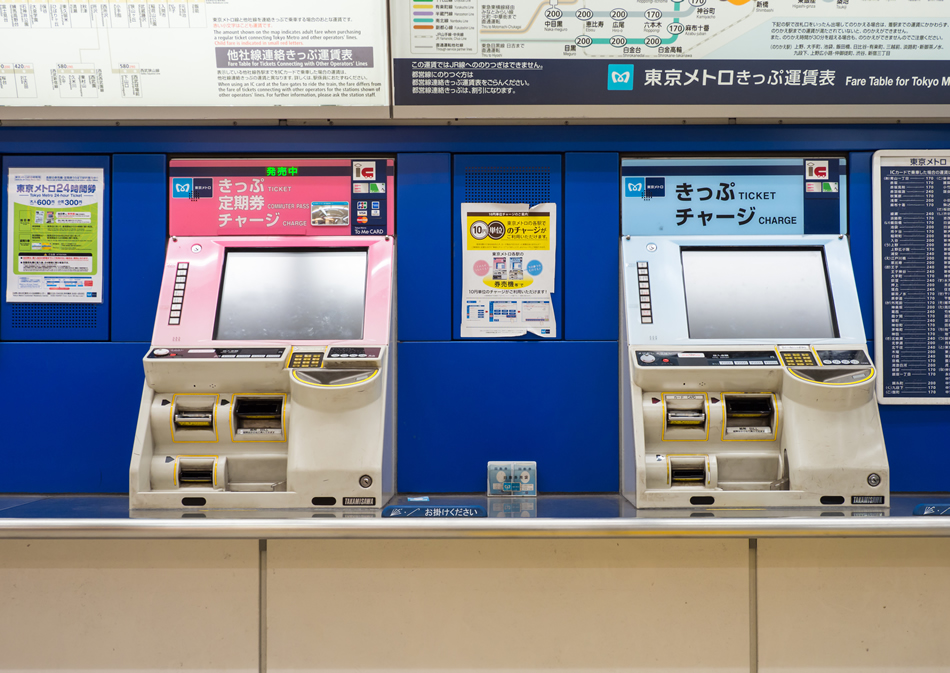 IC cards you can use on the subway

There are two main rechargeable IC cards in Tokyo—Suica and Pasmo. The only differences are who sells them and the design. They can be purchased for a 500-yen refundable deposit from ticket machines at station, where you can also charge them with additional funds.
Touch-in and touch-out at the ticket barriers for the smoothest travel experience, and there's another convenient feature—you can use your IC card to pay at other places, such as vending machines and convenience stores.

Tips for getting around smoothly

Tips for getting around smoothly

To make your journey even, easier download a Tokyo metro app.
Multimodal Door-to-door Route Search (Navitime) is a comprehensive app with information on everything from where to go to what to eat. Search on the map for a spot of interest and let it plan your route. It will automatically recommend you certain train passes for your route – and, if you already have one, just enter the information and watch it adjust the prices for different routes accordingly. The app will also direct you to websites where you can buy tickets for popular attractions in the city.
To work out how to simply get from A to B, Tokyo Subway Transit Search lets you search for your route, helpfully highlighting it on the Tokyo subway map. Fare information and free wifi spots are also displayed.

Trains run generally from 5am to around midnight. Always confirm your route using the Multimodal Door-to-door Route Search (Navitime) or Tokyo Subway Transit Search or online.

You may have heard stories or even seen a video of professional pushers, white gloved station officials who are tasked with getting people onto crowded trains, ensuring the doors are closed and that everything is working to time. Welcome to Tokyo's rush hour, which runs approximately between 7.30am-9.30am and 5.30pm-7.30pm, although the mornings are definitely more of a squeeze. If you're not a fan of crowds or have large luggage, it may be worth outside the peak times.

Use the Tokyo metro free wifi

Plan your next delicious meal or send photos back home to make your friends jealous. Tokyo Metro offers a free wifi service in most of its stations, and the connection is available in several of the Toei stations too. Simply select the "Metro_Free_Wi-Fi" or "Toei_Subway_Free_Wi-Fi" SSID and follow the instructions to connect.