Monjayaki—a savory pancake similar to okonomiyaki, Fukagawa meshi clam rice, and Yanagawa nabe hot pot are only a few of the infinite number of local specialties born in Tokyo’s 23 wards, the western Tama area, and the Izu and Ogasawara islands. 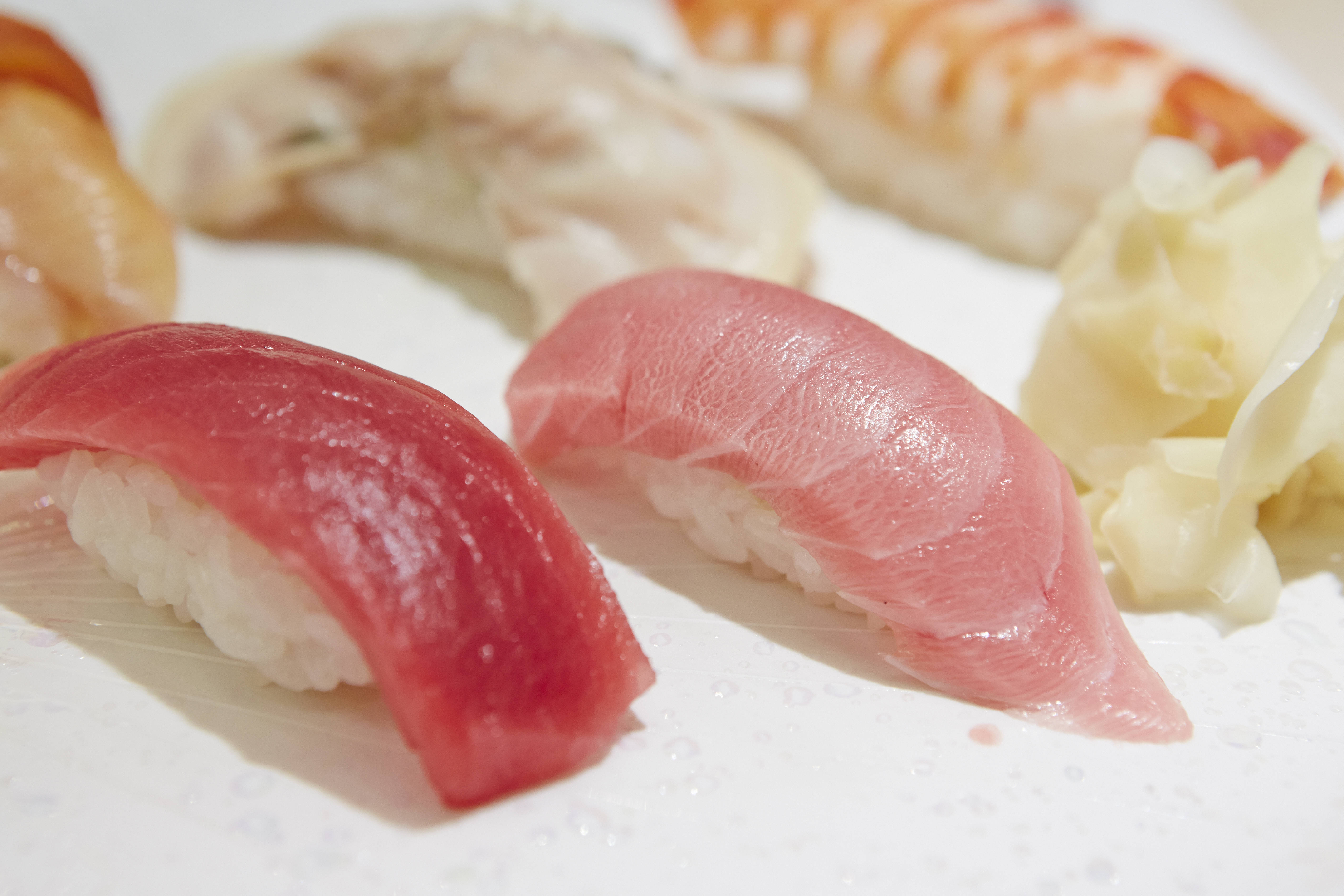 Sushi has grown in popularity the world over. What better place to try all the different kinds of delicious, eye-pleasing sushi available than Tokyo? From nigiri-zushi—vinegar-flavored rice topped with bite-sized pieces of fresh fish—to chirashi-zushi (literally "scattered sushi")—a bowl of rice with seasoned vegetables mixed in, topped with a variety of seafood and egg.

Soba established itself as a popular everyday dish by the mid-Edo period (18th century), and came to be a major local specialty of Tokyo. It’s also one of the few dishes that is perfectly acceptable to slurp. This is because sucking air is believed to enhance the aroma of the buckwheat noodles. 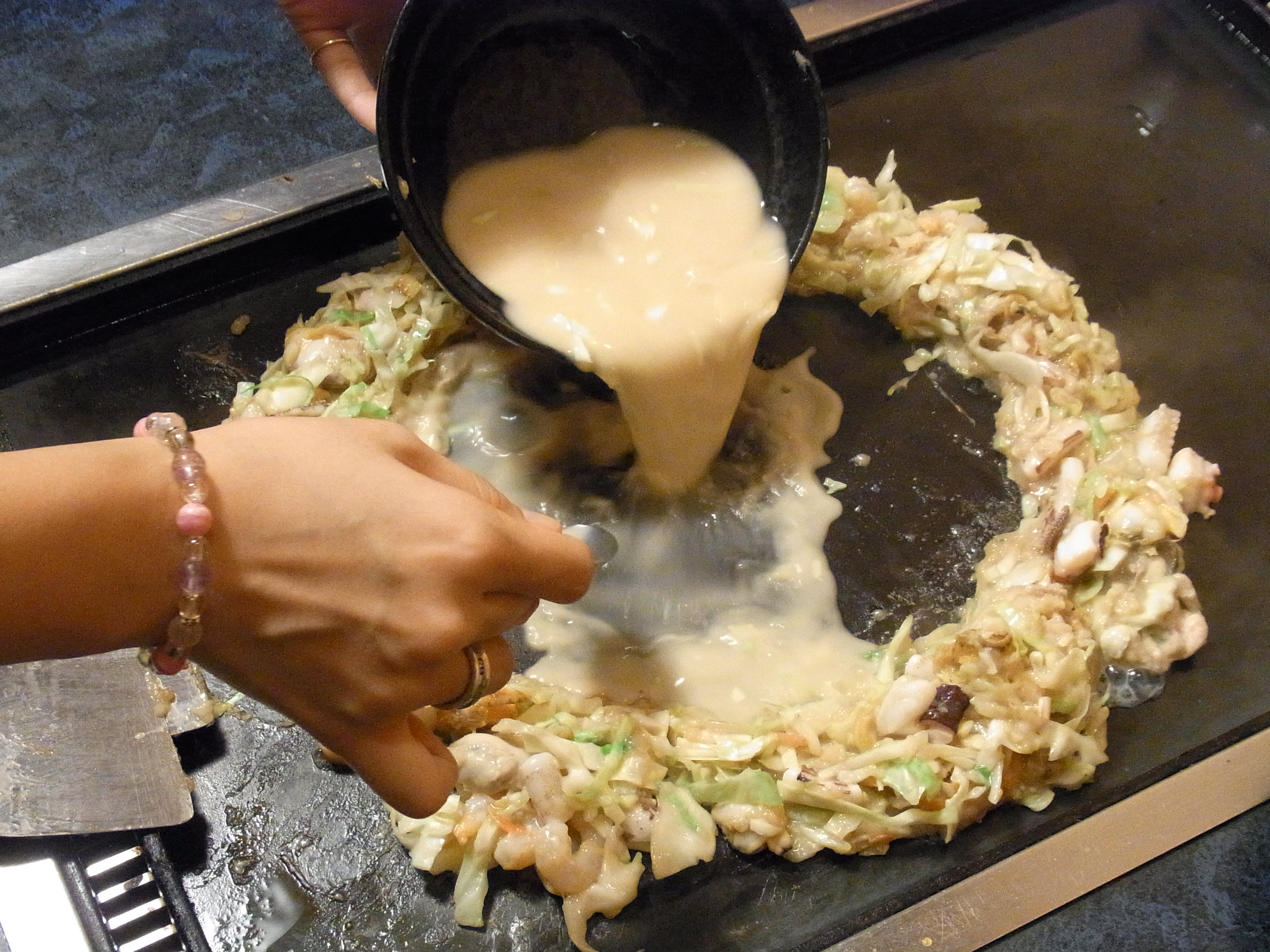 Monja-yaki is made with a flour-based batter topped with shredded cabbage and other ingredients and cooked on a hot griddle. The 60 or so eateries lining Tsukishima Monja Street serve everything from meat and seafood to ethnic-inspired monja-yaki. The best part is, you get to make it yourself.

Fukagawa-meshi is a bowl of rice topped with a miso-based stew of Japanese littleneck clams and chopped leeks. The dish originated as a kind of fast food for fishermen working busily in the Fukagawa area near the mouth of the Sumida-gawa River, where clam gathering boomed in the Edo period. 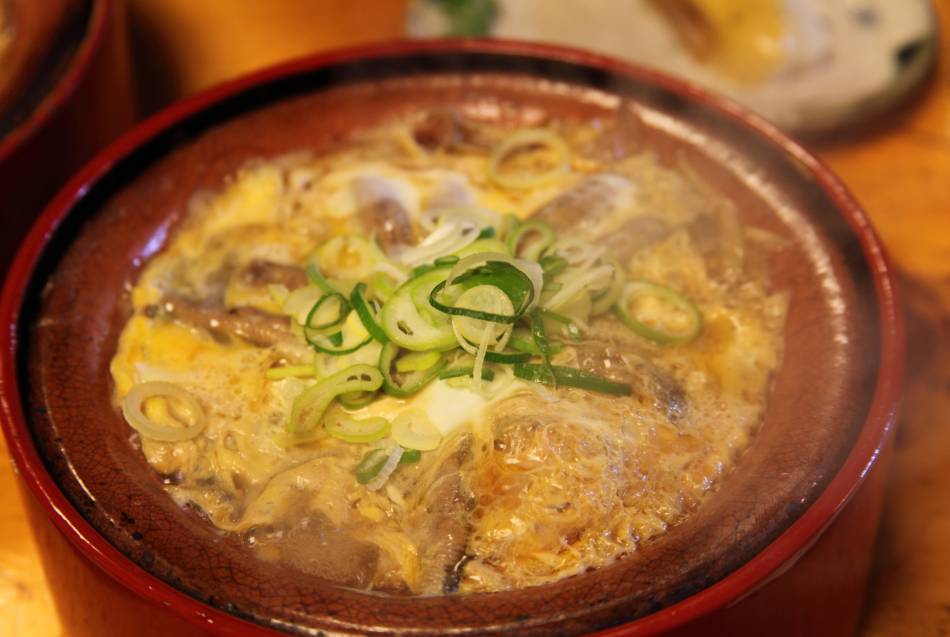 Dojo-nabe is a shallow pot dish lined with dojo loach (a type of freshwater fish) cooked in soy sauce-flavored broth, served with chopped leeks. Yanagawa-nabe is also a hot pot dish made with loach, cooked with burdock and eggs. Loach has been used in Japanese cuisine since the Edo period. 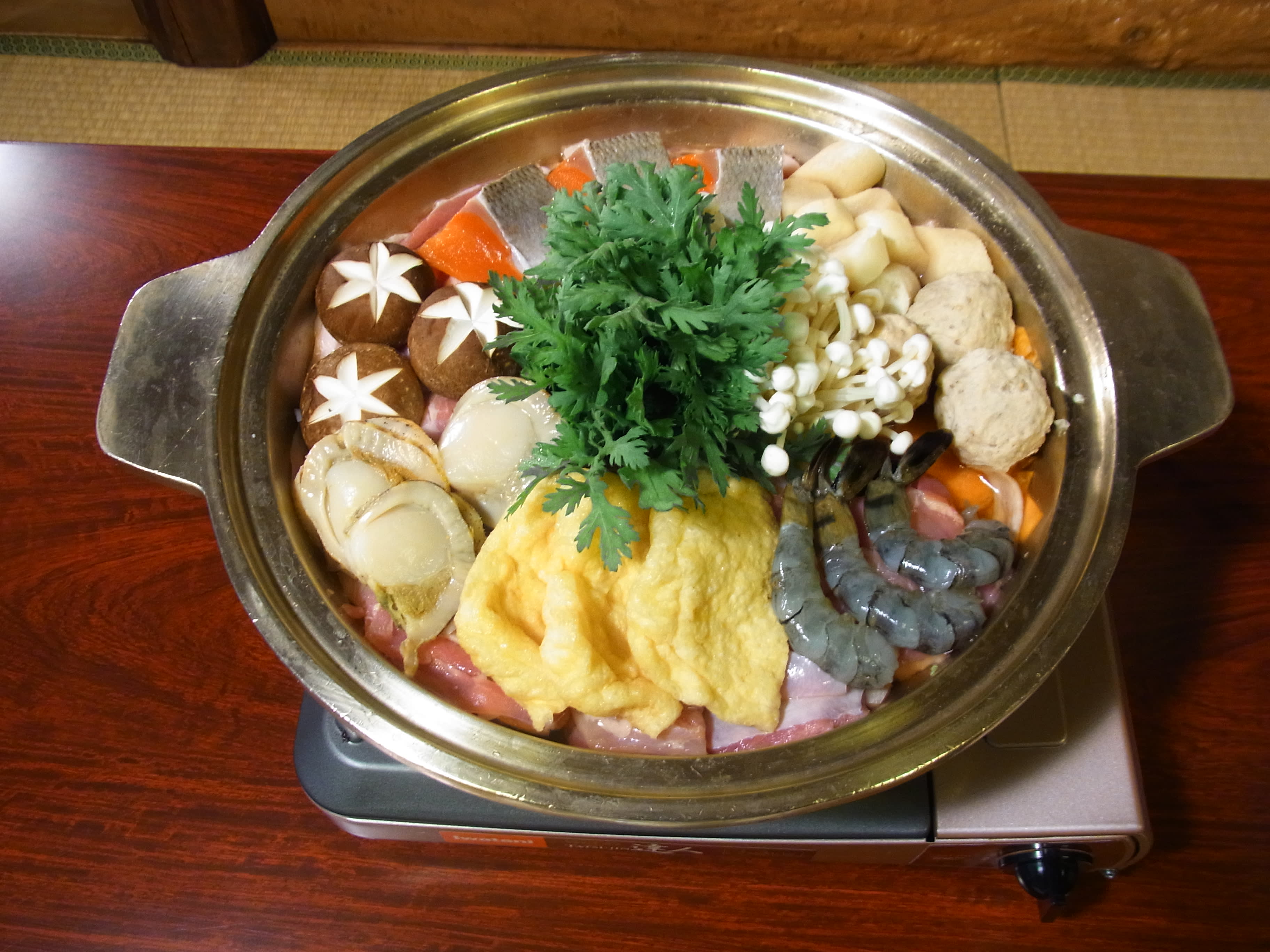 This hearty hot pot made with meat and seasonal vegetables is staple for sumo wrestlers (each sumo stable has its own distinct recipe). Try it while watching a sumo tournament or after a visit to a sumo stable, or drop by one of the many popular specialty chanko-nabe restaurants around the city.

People on the Izu and Ogasawara Islands prepare seafood not only as sashimi but also charcoal-grilled, steamed, and in miso-soup dishes.

Shima-zushi is sushi made with fish caught in the waters near the islands. To preserve the ingredients in the hot weather, the fish is marinated in soy sauce, a preparation called zuke, and the rice is flavored slightly sweeter and stronger than typical sushi rice. Wasabi, which is difficult to find on the islands, is substituted with karashi mustard or togarashi chili pepper.

Kabayaki eel is prepared differently in the Kanto (Tokyo and surrounding prefectures) and Kansai (Kyoto, Osaka and the surrounding prefectures) areas. In the Kanto area, the eel is sliced down the back, first broiled plain, then steamed, and then seasoned and grilled once again. According to legend, because a large population of the samurai warrior class lived in Edo (now Tokyo), it was bad luck to slit the eel down the belly.

Tsukudani is small fish, shelled clams and lavers that are cooked and candied with ingredients such as soy sauce, mirin (sweet rice wine), and sugar. Because of its saltiness and sweetness, tsukudani is highly preservable and has been favored as a storable side dish in Japanese kitchens since the Edo period. Tsukudani is often used for onigiri (rice balls) and ochazuke (bowls of rice served in green tea or dashi soup). Its name came from the area of its origin called Tsukudajima (current Tsukuda area of Chuo City), which was the fishery center in the city of Edo.

Fukujin-zuke is a kind of pickled vegetable. The inventor of fukujin-zuke was an owner of a snack shop near a shrine dedicated to the Benten god in the Yanaka area (part of present Taito City). Through a lot of trial and error, he finally succeeded in perfecting his recipe sometime in the late Edo to early Meiji periods (late 19th century) using seven vegetables, including daikon radish, eggplant, natamame (sword bean), renkon (lotus root), uri (oriental melon), shiso (Japanese basil) and turnips. The pickles were named after Yanaka Shichifukujin, or Yanaka shrines dedicated to seven gods of good luck. Fukujin-zuke is a popular garnish for curried rice.

Bettara-zuke is a kind of pickled vegetable, which is made by salt-curing daikon radish and pickling washed and dried daikon in a mixture of koji (rice malt), sugar and mirin. Takuan-zuke, on the other hand, was originally made by pickling air-dried daikon in salted nuka (rice bran). After it became popular in the late Taisho and early Showa periods (1920s), a method of using salt-cured daikon instead became popular to meet increased production demands. The product soon started to be called Tokyo Takuan-zuke.

Miso is a bean paste made from steamed and mashed soy beans along with salt and koji (rice malt). It is highly preservable and is an indispensable seasoning for Japanese cooking. Koji is made from wheat, beans or rice, depending on the region, and Edo amamiso uses rice koji. Compared to salty kinds of miso such as Sendai miso and Shinshu miso, Edo amamiso contains half the amount of salt and twice the amount of rice malt, which makes it very sweet. The period for ripening and preservation is also shorter.

The nature-rich Okutama area is also known for good-quality natural water. Okutama wasabi is grown in this local pure spring water, whose temperature stays about the same throughout the year. Wasabi farming has been practiced since the Muromachi period (14th century) and Okutama is known as one of three major wasabi-producing areas in Japan along with Shizuoka and Yamanashi. While it takes at least a year and a half to harvest, Okutama wasabi is known for its strong aroma and thickness.

Fish from river and harvest from mountains

Called "Tokyo's backroom," the Okutama area is rich in nature with beautiful trees and valleys and has totally different characteristics from central Tokyo. Freshwater fish such as yamame (cherry salmon), masu (trout), ayu (sweet fish) and haya (dace; also called ugui) live in local rivers including the Tama River, the Akikawa River and the Nippara River. They are also served at local restaurants in the area. Wild edible plants such as warabi (bracken), zenmai (fiddlehead fern) and taranome (bud of aralia) are found in spring, while kinoko mushrooms, chestnuts and persimmons are some examples of fall harvest from the mountains in the area.

Umeboshi is a salt-pickled and sun-dried plum. Being a good alkaline food, umeboshi has been eaten by Japanese people for thousands of years for their health. It is a specialty of Ome City, which is known for the beauty of 25,000 blossoming plum trees and attracts many visitors during their peak in early spring.

Konnyaku is a jelly-like yam cake with a unique texture, which is made from the mixture of konnyaku yam and pure water, softly firmed with a solidifier such as lime. In the Tama area, konnyaku is produced with locally-grown konnyaku yams and good-quality water from Akikawa River.

The area on the border of Saitama, including Musashimurayama City, Mizuho Town and Higashiyamato City, has been known as an area of producing good-quality green tea since the Edo period. While the variety of tea produced in the entire area is generally called Sayama cha, the produce grown in Tokyo has been specifically called Tokyo Sayama cha since the mid Showa period (1950s) to differ from that grown in Saitama. Harvest season of Tokyo Sayama cha occurs twice a year, which is spring and summer and is less than other tea producing areas of Japan. This, however, is believed to give the tea more richness and flavor.

Kusaya is a kind of dried fish that is produced mainly in Niijima and Hachijojima of Izu and also in Chichijima of Ogasawara. Kusaya is made by soaking fish in fish sauce before drying it, which as a result creates a particular smell that can be liked or disliked depending on the person. Since kusaya causes a stronger smell when grilled, packages of pre-grilled kusaya are also sold.

Ashitaba is a kind of Japanese herb similar to angelica. Its name literally means "tomorrow's leaves," which indicates this plant is so robust that it will have new leaves tomorrow even if they are picked today. It grows in Hachijojima Island and its medicinal effectiveness has been known since the Edo period. They are good to be eaten as tempura, stir-fried, or in miso soup.

Tsubaki, or camellia, is a specialty of Oshima Island and produces good quality oil from its fruits. Among vegetable oils, camellia oil has the highest content of oleic acid, which is believed to help reduce bad cholesterol in blood. It is known as the best oil for tempura since it makes an especially light and crisp coating.

Located farther south from central Tokyo on the main island, Ogasawara Islands are known for a variety of tropical fruits. From bananas and oranges to papayas, melons and mangoes, the fresh taste of their fruits are favored by many people. Unlike any other area in Japan, Ogasawara is also a producer of coffee.

Among many Tokyo islands, relatively large islands such as Oshima and Hachijojima of the Izu Island chain have a dairy farm and are producing fresh dairy items such as milk and butter. They also make a variety of ice cream with local products, such as tropical fruits and ashitaba.

Ningyo-yaki is a small snack cake and is made by cooking a batter of flour, eggs and sugar in an iron mold. They are sold both with and without anko (sweet bean paste). While many ningyo-yaki are in a traditional shape of shichifukujin (Seven Gods of Good luck) or the Asakusa Kaminarimon gate and giant chochin lantern, the ones in a shape of characters from kids' TV shows are also gaining popularity. The cake was named after its place of origin, the Nihonbashi-ningyocho area of Chuo City. A popular Tokyo souvenir.

Kaminari-okoshi is a snack popular for its crispy texture. It was originally sold by street venders near the Kaminarimon gate in Asakusa sometime in the mid Edo period (18th century). Kaminari-okoshi is made by roasting steamed sweet rice to pop, mixing them with other ingredients such as peanuts, and forming them into a shape with sugar and mizuame (starch syrup). It is believed that the name "okoshi" came from a Japanese verb "okosu," which means "to establish" a family or a name, and therefore the snack was considered as a good-luck item. It is well-known as a popular Asakusa souvenir today.